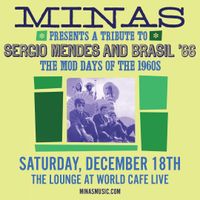 Sergio Mendes turned 80 this year! He’s had an outstanding career as a top-selling artist and record producer, and most acclaimed living Brazilian musician outside of Brazil. PBS honored him with a special program aired early this summer, watched by millions of viewers. Sergio Mendes broke many barriers - with many of his top 40 hits in Portuguese. “Brasil 66”, featuring singer Lani Hall, packed large venues and exposed a whole new generation to Bossa Nova and Brazilian Jazz. Sergio and and his band are still performing and touring and continues to inspire!

JIMMY BRUNO trio featuring JIMMY BRUNO and guitar, DYLAN TAYLOR on bass and Mike DeMonte on drums will be appearing at Franklin’s Glenside...formerly the Blue Comet...106 S Easton Rd in Glenside... Please come hang out with us and Listen to some jazz!

A great place to celebrate VD! 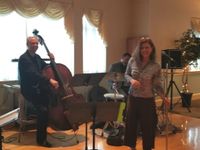 Greg Moore and the Lotus Band 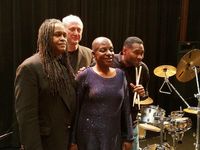 Welcome to my website! Check out the videos, photos, and the music player at the bottom of every page that has my latest recording on it to listen to and download. Please sign up for the email list so I can keep you posted on projects and public performances.

Cadence Magazine 4/2018 Review of One In Mind

It’s sad to be engaging this music after Coryell’s passing, but nice to check in with his playing regardless of circumstance. The bustling, fulsome groove on “The One or the Nine” makes for a rousing start. There’s strongly motivic playing at the heart of things, and the leader Taylor sounds fantastic in the thick of it all. Coryell’s playing suggests he’s fallen back in love with Grant Green, with a much more pared down phraseology than many associate with him. “Loft Funk” sounds especially dialed in, and it’s certainly more than a pedestrian vamp, since there are nice chord changes and rhythmic shifts. Obviously, the key to generating excitement in such contexts is band chemistry, which is here in abundance with this trio. Indeed, as much fun as it is to focus on Coryell, you can’t help but be impressed by the tasty press rolls from Clark and the nicely rotund shapes from Taylor. “Jumbo Liar” is a kind of Monk-like lope, another tune where Taylor and Coryell dig into unisons in ways that don’t detract from the rhythmic needs of a trio. The back half of the disc finds the trio stretching out a bit more in thematic terms. They range from the soft, acoustic ballad “Song for Dennis” to a laid-back tour of Bud Powell’s “John’s Abbey” to Taylor’s fine “Hittin’ and Missin’,” which recalls some of Pat Metheny’s more Ornette-influenced pieces. On the latter two pieces especially, Coryell’s harmonic range and imagination shine through. And he’s in positively blistering form on acoustic on “ARC,” a vivid reminder of his power and technique. It’s fitting, too, that Coryell’s rousing “The Dragon Gate” closes out this fine session. Jason Bivins

Dylan Taylor – One In Mind (BluJazz): Bassist/cellist Dylan Taylor has had a streak of very good luck over the years: A member of a local jazz band that backed up visiting players, he met and played with guitarist Larry Coryell. He later befriended and played with drummer Mike Clark. In 2015, the friends were set up to do a live performance which was wiped out by a heavy snowstorm, but also stranded the players in the performance hall. While stranded, they took advantage by playing AND recording their planned performance. Hence this disc. It may well be the last recording for Coryell, who passed away in February of this year. The program features five compositions by Coryell, one by Clark and three by Taylor, plus a cover of Bud Powell’s “John’s Abbey”. The performance is wonderfully varied and alive. Definitely a must for fans of Larry Coryell, jazz trios or varied explorations by three tapped-in musicians. http://www.wtju.net/new-jazz-adds-6172017/

DYLAN TAYLOR/One in Mind: So if you're a bass player of a certain age--hell, any age, you just don't turn down the opportunity to be in a trio with Larry Coryell and Mike Clark. A jazz trio working as a unit even if they aren't, even if they are pals, this is the stuff that keeps you out late at night at the club; the band is cooking and their left leaning edge is undeniable keeping you rapt and on the edge of your seat. Tasty stuff that won't happen again, this is as jazzbo as it gets and it's mighty fine.
BluJazz 3450 http://midwestrecord.com/MWR1229.html

Chip Stern - One In Mind review

“… last year’s dramatic interplay with Dylan Taylor on the master bassist’s ONE IN MIND, which featured a remarkable degree of conversational funk and swing between Larry and the innovative drummer Mike Clark, an ideal pairing I was most certainly looking forward to hearing a great deal more of in the near future, Larry and Mike being two of my fave musicians and people, but then, we are all playing with the house’s money, are we not. It wasn’t meant to be. Chip Stern, http://radiofreechip.com/

53 Stations is a piano-less quartet of musicians

and Northern Delaware. The group is firmly rooted

in tradition and polished musicianship. Each

member of the quartet, besides being a seasoned

veteran of their instrument, is a respected educator

in their own right. The Hilltop Sessions is a

collection of compositions by Shapiro, Taylor, and

Rohrich. The compositions take their influence

and mainstream jazz. The highlighting features of

this album are the band’s cohesive sound, precise

articulation of phrases, and clear identity. The

music is adventurous, but never goes so far out to

sea that it alienates the listener. In fact, the music

has equal suitability to venues such as cocktail parties,

weddings/parties, jazz clubs, and festivals. The

recording quality that allows the listener to hear

each individual voice and their contribution. The

enough to keep the jazz aficionado’s attention. In

fact, the language of each player suggests a wealth

of understanding of the different periods this

Just learned of the passing of Sam Dockery, Jazz Pianist, from this world. I am proud to say I played and recorded with Sam and drummer Butch Ballard on what was probably their last recording; Butch's 2007  record Mozaic.  I've been meaning to put the recording up on this site. I will do it now.